The Fukuoka Smart East initiative strives not only to solve problems that Japan's cities face now but also to solve predicted future issues. Any smart technologies that we implement will need to grow with the community and be increasingly impactful over time. Currently, Fukuoka Smart East is investigating autonomous buses for this very reason. These vehicles have the potential to revolutionize public transit systems and provide safe, reliable service to residents throughout our community and possibly beyond. 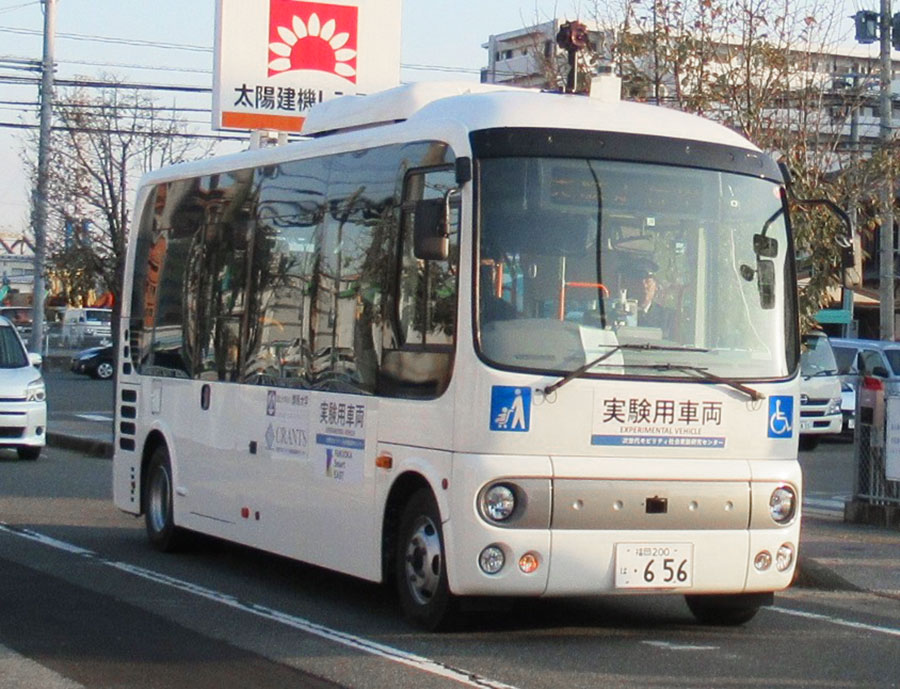 Assessing the Perks of Autonomous Buses

With driverless personal vehicles, it is relatively easy to see the benefits. Being able to check-in with work, eat breakfast, or simply relax on your morning commute seems ideal. But what about driverless buses? What benefits will they bring to our community? First, they can lessen the pressure felt due to Japan’s declining population. With a smaller pool of drivers, it can help to automate certain roles so that the smaller workforce does not lead to a reduction in bus service.

Another reported benefit of driverless vehicles is the increase in safety due to their predictability. While human error often accounts for the majority of traffic accidents, removing the human aspect from the equation may help. Autonomous buses use sophisticated technology and are programmed to obey traffic laws. Where a human bus driver might be distracted by a passenger asking questions or an unusual traffic pattern, a driverless bus would take cues from sensors and internal programs.

It is important to note here that as the self-driving bus may be programmed to be predictable and law-abiding, it will still be on the road with humans who are making quick decisions and occasionally mistakes. As a result, we cannot assume that the streets will be accident-free, but can hope for a reduction in traffic incidents.

Testing Out the Technology

During the four-day public test our team held in November 2019, 230 people were able to ride on an autonomous bus free of charge. The self-driving system is developed and maintained by Gunma University and contains finely tuned sensors, including a LIDAR (Laser Imaging Detection and Ranging) visible light camera, GNSS (Global Navigation Satellite System), and a gyro sensor. These systems and the fully-developed buses were thoroughly tested and cleared for safety before we conducted our trial.

We held demonstration rides during the day and on public roads around a loop that began and ended at Matsushima Elementary School. For the demonstration, the bus was operated with a driver specially trained in autonomous buses sitting in the driver’s seat. The bus automatically performed many standard driving operations, such as turning the steering wheel. At the same time, the driver checked to ensure that everything was working correctly and continually monitored for safety.

Once members of the public had the chance to ride the autonomous bus, they were given a survey to complete. While the future logistic and economic benefits of driverless buses are important, we are also very interested in how the public feels about using this technology. We were pleased to see that 97% of those surveyed felt safe or neutral while riding the bus, and 100% of those who responded would definitely use or consider using it in the future if it becomes an option. A full 100% of respondents reported that they look forward to self-driving technology. As we consider future applications for autonomous buses, it is helpful to know that our residents are interested in utilizing them.

Should the technology be deemed appropriate for Fukuoka Smart East or perhaps for the wider Fukuoka region, there are many possible benefits. As mentioned above, with the decreasing number of drivers available to operate buses, the consequences could be severe. As bus companies explore ways to redistribute a reduced workforce, they will likely cut the more rural routes that are less popular. However, this would remove a vital transportation option for many elderly residents who rely on the service to get around.

In addition, these buses can also help to serve the disabled community. Visually impaired or mobility impaired residents who cannot drive and require a reliable, affordable, and safe form of transportation could use the buses no matter where they live. As Japan’s roadways are often narrow and sometimes difficult to navigate on foot or in a wheelchair, knowing that a bus will always be on time and have a predictable route could be of great benefit to these residents.

Of course, this all depends on the success of the technology throughout continual, rigorous safety and road testing, as well as a thorough cost analysis. Our team is continually seeking out, considering, testing, and reviewing the feasibility of future transportation options. As we discover new possibilities and find more potential solutions, we will continue to assess their public benefit and viability.

Our team would like to extend a special thanks to the members of the public and the media who came to the trial runs and gave their opinions on the demonstration.